“I never truly believed that Olivia Palgrave was my mother.”

So begins this page-turner of gothic suspense as award-winning author Douglas Clegg spins the tale of a boy growing up within the web of secrets of a house of shadows by the sea in New England. 120+ pages in print. Genre: Gothic Suspense, Psychological Horror.

Sometimes, Memory is the Scariest Place

Posted in | Comments Off on Mrs. Bluebeard

Beneath the Mask of Nice, a Face of Horror

In this “masterful novella”* of horror and suspense from bestselling and award-winning author Douglas Clegg, a costume party opens the door to a terrifying world.

Are They Watching You?

Nothing goes right for Harold until he finds the famous mask based on his father’s favorite old-time comic strip. Joe Face and his family all had a nice smile and an easy-going attitude to the worst life could throw their way — in the funny pages.

But soon enough, his life turns inside out, revealing…

The Faces of Nightmare

Posted in | Comments Off on The Faces

Can you escape the nightmare?

Men imprisoned, one in war and one in an asylum, these two novelettes are packed with twisted psychological suspense and spine-tingling horror at its darkest. 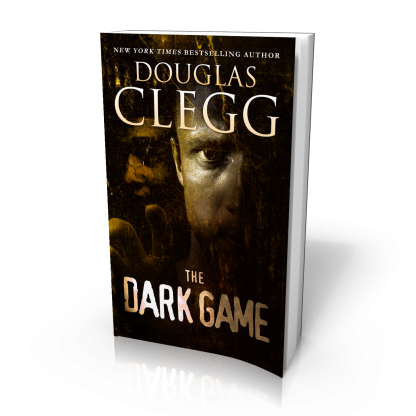 One man, a prisoner of war; and the other, a disturbed young man who wants out of a hospital for the criminally insane – at any cost!

Douglas Clegg brings together two dark classics with The Dark Game and I Am Infinite, I Contain Multitudes in this novella-length collection (125 pages in its print edition).

Note: These two short novellas/novelettes can also be found together in the collection Lights Out.

Posted in | Comments Off on The Dark Game

Dinner with the Cannibal Sisters 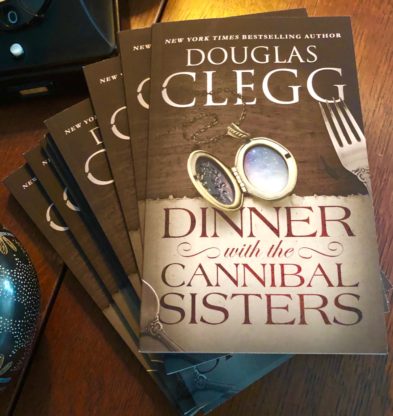 Dinner with the Cannibal Sisters is 112 pages in its hardcover form. NOTE: this is not a horror novel as such. It is more a gothic literary mystery with a dark underpinning.

In October 1890 authorities discovered two teenaged girls at Bog Farm surrounded by a scene of unimaginable carnage. A legend grew of their cannibalistic night of terror…

Twenty years later, an inexperienced reporter travels to the infamous New Hampshire farm, determined to shed light upon the events of that night of sheer horror.

— murderers whose mystique has lasted more than a century. But of them all, the tale of the Windrow girls is unrivaled in its legend of depravity and innocence corrupted.

Dinner with the Cannibal Sisters is 100 pages in its first print edition. It is a short novella.

Posted in | Comments Off on Dinner with the Cannibal Sisters

From New York Times bestselling and award-winning author Douglas Clegg comes a dark novelette of a village caught on the edge of fear. 60 pages.

Someone should do something about them. 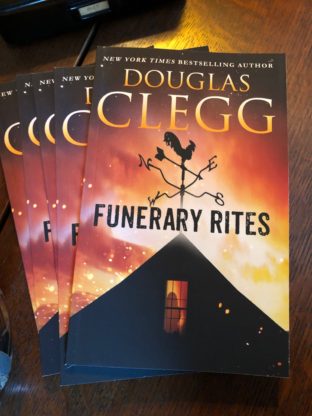 When outsiders arrive to a quiet New England village, they bring odd and outlandish customs with them. One special summer night, something terrible happens in the village — brought on by those strangers, the ones who live out in the woods, the ones who go barefoot and speak in an odd language.

“Clegg’s stories can chill the spine so effectively that the reader should keep paramedics on standby.”– Dean Koontz, New York Times Bestselling Author.

Funerary Rites can also be found within the collection, Lights Out.

Posted in | Comments Off on Funerary Rites

She broke the law of the Dead…but at what price?

If you love the fiction of Daphne du Maurier, Susan Hill, Shirley Jackson, Edgar Allan Poe, and other dark gothics with ghost stories, you are sure to enjoy the novella, Isis.

“Clegg (The Abandoned) expands the burgeoning backstory of his multivolume Harrow haunted house saga with this poignant chamber tragedy involving young Iris Catherine Villiers (who, as an adult, will become Isis Claviger, oracle of the spook-ridden Hudson Valley academy)…This potent novella, one of Clegg’s best, is both a stand-alone triumph and a powerful new chapter in his evolving series.”

“…a story of love, loss and longing…told with the beautiful prose of an old-fashioned Gothic era.”

From The Strand magazine:

“Haunting yet poignant, Isis is a work that should firmly place Clegg among the all-stars of horror such as Straub, Machen, LeFanu, and Stoker.”

“‘Never sleep there, for the dead enter your dreams.’ Those frightening words froze me to the page. And when Isis dares to open the doors to the Tombs, I knew the dark legends and terrors of this book would stay in my dreams for a long, long time.”

“Douglas Clegg’s Isis is a haunting beauty of a tale as chilling and dark as the shadows on an October night.”

“…a literary work for the ages. This story is Clegg at his absolute best. . . . lovely and powerful and profound. . . . a story that will live on for decades”

Posted in | Comments Off on Isis

Posted in | Comments Off on The Necromancer

There is No Madness but the Madness of the Gods

Short novel of 150 pages in its print edition.

In Purity, the darkest force is love. From award-winning author Douglas Clegg comes a dark psychological thriller of dangerous obsession. This is one of Clegg’s bestselling and most popular novellas of suspense.

There is No Purity but the Purity of Love 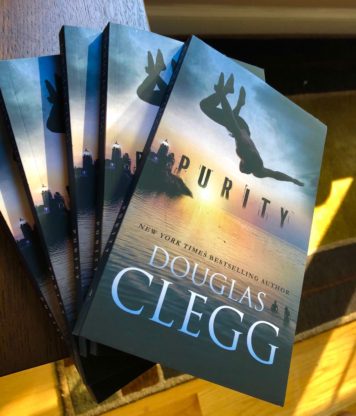 Posted in | Comments Off on Purity

The Horror Begins When You Say the Words… 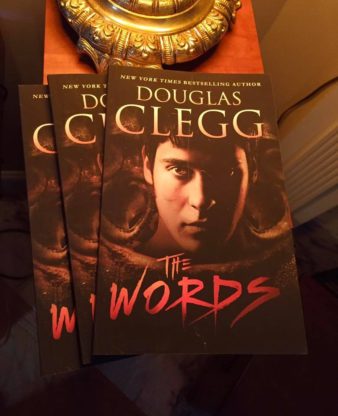 130 pages in print, The Words is the second book of the Dark Coming of Age series.*

When Mark befriends outsider Dash, he believes his new friend to be an outcast rebel. But Dash leads Mark into a world of endless night where a ritual of darkness leads to terror…a Lovecraftian of the terrors of devotion.

A Short Novel of Friendship, Gods and Monsters

Posted in | Comments Off on The Words